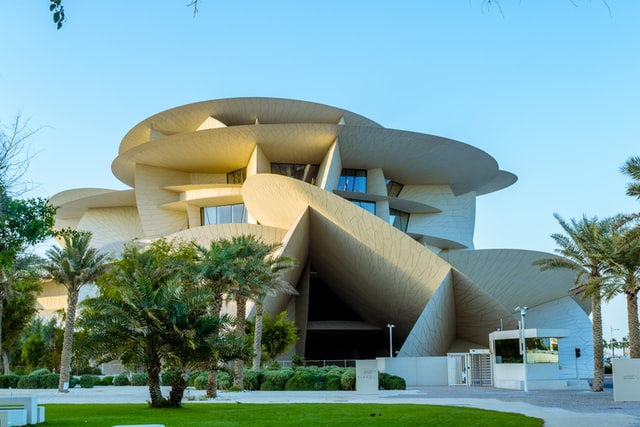 The National Museum of Qatar is a new landmark in the city of Doha in the state of Qatar in southwestern Asia.

The National Museum of Qatar talks about the country’s culture and the Qataris themselves. It has an exhibition of objects that illustrates an important aspect of the entire history of the state. Near the museum, the territory was arranged – there is a landscape park with 114 fountain sculptures.

Surprising in the museum’s construction was that it was built around the old palace of Sheikh Abdullah bin Jassem Al Thani, the late son of the founder of modern Qatar. It was initially the home of the royal family and has recently served as a national museum.

The architecture of the building of the National Museum of Qatar conquered all residents and guests of the city with its uniqueness. The museum building was designed by the French architect Jean Nouvel. The architect was inspired by the “desert rose”, which is one of the varieties of the gypsum mineral. Mineral aggregates form intergrowths of lenticular crystals, which outwardly resemble a rose flower. As a result, the building of the Qatar National Museum turned out to be incredible, unlike any other facility in the world.

The museum complex consists of vast discs of different diameters, which support and elements of outstanding design. The discs cover the space between the galleries and form an inner courtyard. The museum’s roof consists of 76,000 panels, which are made in 3,600 different shapes and sizes. The distance from the entrance to the gallery is about 1500 meters. Throughout the museum, there is a ventilation system due to the hot climate.

The National Museum of Qatar has a massive collection of exhibits. You can learn about the long history of the state at different times.

The museum has only 11 galleries, and the expositions are divided according to the meaning into three parts: “The Beginning”, “Life in Qatar”, and “The Modern History of Qatar”. Among the expositions, you can see collections of traditional clothing and utensils, stone products and jewelry, historical exhibits and models of old ships, collections of weapons and archaeological finds, as well as works of Qatari art: poetry, music, painting, feature films. The museum complex also displays national clothing that protects from the heat and traditional medicine items.

The main feature of the Qatar National Museum is the huge aquarium, which has two levels. The first level is inhabited by ancient species of sea inhabitants, on the second – the current inhabitants of the Persian Gulf, for example, sea turtles.

The glorious National Museum of Qatar was a real discovery. In addition to museum exhibitions and galleries, there are many other entertainment and services on its territory.

Getting around the city is relatively easy, thanks to services such as book a van near me.

Previous articleWeed Delivery in Brantford for CBD Oil. Why Should You Buy?
Next article6 Points You Need To Know While Buying Cut Resistant Gloves!