What Are The Major Criticisms Of Henri Rousseau? 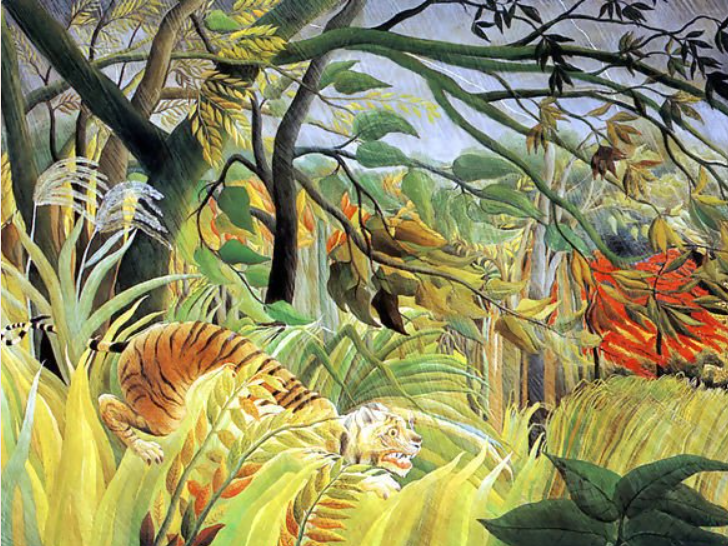 The world-famous painter Henri Rousseau was a self-taught artist of the French post-impressionist movement. He was known for his Naive, exaggerated style that defied academic conventions.

Because of his lack of training and avant-garde style, Henri Rousseau’s art received heavy negative reception from the art community and elite. In this article, we’ll discuss some famous Henri Rousseau art and the major criticism he received for it.

Henri Rousseau was a French post-impressionist painter who never gained formal education. He was born on May 14, 1844, into a financially challenged family of a tinsmith.

Thanks to his family’s financial situation, Henri was forced to begin working in his father’s shop at a young age. Unfortunately, his father accumulated so much debt that they were chased out of their home, and Henri had to switch to boarding school instead of going to high school from home.

While in high school, Henri only performed well in art and music but failed to grasp other subjects. Between high school and when he started exhibiting his paintings in 1886, Henry Rousseau worked in a law firm, served in the army, lost his father, moved to Paris to support his mother, and married his landlord’s 15-year-old daughter, Clémence Boitard.

Henri Rousseau’s marriage to Clemence, who later died in 1888, produced six children, but only one survived. He began working as a tax collector and, in 1886, began exhibiting his works at the Salon des Indépendants, the same place he exhibited his final painting, The Dream.

From then, he began painting and exhibiting more. He even met Pablo Picasso, who hosted a banquet in Henri’s honor and called it Le Banquet Rousseau.

On 1910 September 10, Henri Rousseau’s career and life ended when he died from a blood clot resulting from gangrene on his leg. He was buried three good times!

Because he died a pauper, he was first buried in an obscure part of the graveyard where paupers were buried without headstones. Then, in 1912, he re-entered a private plot, the biggest in Paris, and was given a headstone with a poem.

Years later, in 1947, his body was moved again to Laval, France, his birthplace. His grave currently lays at a park called Jardin de la Perrine and is open to public visitation.

Henri Rousseau And Criticism of his Art Style

In this day and age, it’s common to find self-taught artists and have the art world consider them to be real artists. But unfortunately, this wasn’t so during Henri Rousseau’s era, and that was the beginning of his problems as an artist.

As a painter, Henri Rousseau was hardly considered a real artist because he didn’t go to art school and wasn’t taught academically. As a result, his avante-garde paintings easily gave him away as they lacked the realism and modernism of the schooled artists, earning him the monicker, Naive.

The issue critics and artists had with Henri Rousseau’s art, particularly those of the jungle, is that they hinted that Henri lacked an understanding of proportions and only ever showed one perspective. The fault could be easily awarded to his lack of formal academic art training where he would have learned such skills.

A classic example of typical Henri Rousseau paintings that possessed the features critics considered worrisome is Suprised, Tiger in a Tropical Storm. The painting depicted a storm in a tropical rainforest and a tiger crouching on the grass.

While it’s a beautiful painting, people noticed his subjects were out of proportion. One such instance was that Henri painted the tiger too large in proportion to the size of the plants and leaves. As a result, the leaves were also painted bigger than they would ordinarily be in the rainforest.

Henri once explained that he was inspired by the tropical forests he saw while traveling to Mexico. However, it was later revealed that he never traveled to Mexico or anywhere else and only exaggerated stories he heard from soldiers who actually went there.

He instead used house plants, botanical gardens, and animal museums in Paris to inspire the Suprised painting. Considering how he’s never actually been to a forest and combined different objects in their habitats into one painting, you may begin to see how the lack of proportion came about.

Henri Rousseau’s style borders on fantasy and doesn’t conform to the academic standards of his time, but that seems to be his strong point. Many art followers love his unique style precisely because he didn’t conform to artistic conventions.

While formal art training might have been beneficial to Henri, conventions and art rules may have cut his inspiration and creativity. The world would have missed out on his raw talent had he gone to train as an artist formally.

You may find disturbing his constant exaggeration of facts, saying he went to places and experienced things he never did. This can dent his reputation and make people cast a dark light over his work.

But once you find out all about Henri Rousseau’s art and the story behind his rise to fame, you become appreciative of how anyone can today become an accepted artist without academic qualifications. You could even call him the father of Avant-Garde art!